Threezero’s officially licensed Game of Thrones series of 1/6 scale collectible figures continues with the an updated version of Tyrion Lannister, as seen in Season 7. Priced at 178 USD / 1385 HKD with worldwide shipping included. A deluxe version will also be available, and will include nine 1/6 scale map markers. The deluxe version is priced at 198 USD / 1545 HKD and also includes worldwide shipping.

Highly-accurate realistic likeness to the character’s appearance in the hit HBO television series.

The estimate shipping date: 2nd quarter 2019
All unpaid orders would be cancelled after the sale
Orders are not transferable to third parties 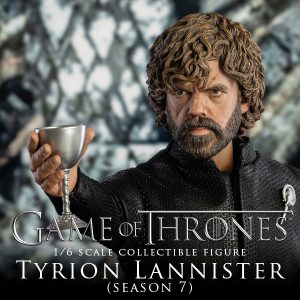